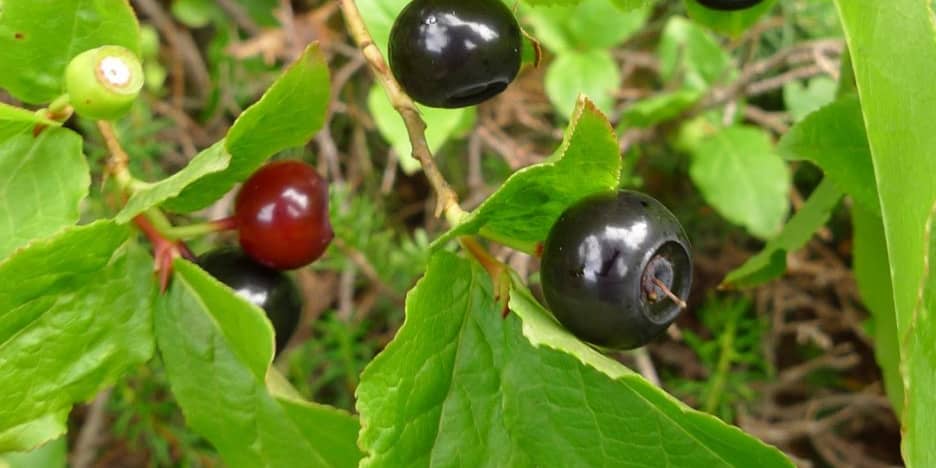 As the summer days become hotter and drier in Montana, a special treat is brewing in our surrounding forests. Huckleberries! These sweet, finger-staining treats are right under your nose on most forest hikes in July in Montana. Although I was born and raised in Montana, I never went berry picking until I was a mother myself and my nature-loving, very observant seven year old pointed out that we had unknowingly stumbled into huckleberry heaven during a stroll in the woods. Brand new to this amazing treat, I questioned my bright boy about his seemingly innate berry knowledge, consulted my good friend google via my phone and once convinced I wouldn’t be poisoning my brood, declared berry season open! That first accidental berry session hooked us and now we spend many days during summer happily gorging ourselves and enjoying the leftover bounty in salads, pancakes and ice cream.

Thank you MontanaVacationfun.com for the great huckleberry picking guide I’ve included below.

Thank you to Wild Harvests for this great picture of a huckleberry. If you see a bush with leaves like the one in the picture and deep purple/black or light purple berries, you’ve successfully found a huckleberry. *Be sure you are positive you’re eating huckleberries! When in doubt, ask someone to help you identify! Scout Out Your Berry Patches Early!

Ideally, you should have 2 or 3 good patches to shoot for. Begin checking the areas a couple weeks before the berries are due to ripen. This gives you the best chance of being the first one to the patch when they do ripen!

Plan to do your Montana huckleberry picking during the week to avoid crowds. Ideally, you will want to arrive before “opening weekend” – in other words, plan to pick a couple of days before the weekend arrives, not a couple of days after. Although there is no “official” opening weekend, you’ll have a good idea what weekend the pickers will show up if you follow guideline #1.

Prepare Your Gear In Advance

There’s nothing worse than arriving in the woods and discovering you’ve forgotten something important. Make sure you bring the following items:

Be aware that animals are much more likely to be on the move during the cooler mornings and late afternoons, so avoid picking during these times to avoid possible confrontations. This doesn’t eliminate the risk of running into a bear, but it may lessen it, especially during the hottest summer months.

Make sure you follow bear safety precautions every time you go out into the woods.

Also, the later into the season you pick, the greater your chances are of a bear encounter turning into a bear attack.

In Montana, September and October are the times when bears aggressively search for food for hibernation needs. Keep in mind these are also the months when the forest’s plush summer food supply begins to dwindle.

We hope you find the Montana Huckleberry Picking Guide useful as you prepare for your fantastic adventure!

Thanks for visiting our Montana Huckleberry Picking Guide

Ski for Stewardship
February 10, 2021
Create A Real Estate Portal
With a portal you are able to:
Got a Question?
Need to Call Us?